Traditional card-centric ticketing technologies, with which every user is issued a physical ticket or token, have been in operation since the 1970s. In these closed-loop environments, the right to travel is encrypted directly onto a ticket’s magnetic stripe or the chip of a transport smartcard. It is then read and verified by heavy-duty equipment such as turnstiles in gated transport infrastructures (e.g., metro lines) and validators on buses and trams. Although they comply with strict security standards and protocols, these systems are questioned when it comes to costs (related to maintenance of ticketing equipment, management of cash and issuance of physical transport tickets), customer attractiveness (due to potentially outdated customer journeys) and the challenges of introducing innovation (such as development of new pricing schemes, account-based ticketing and introduction of new ticketing media, for example, smartphones or payment cards). 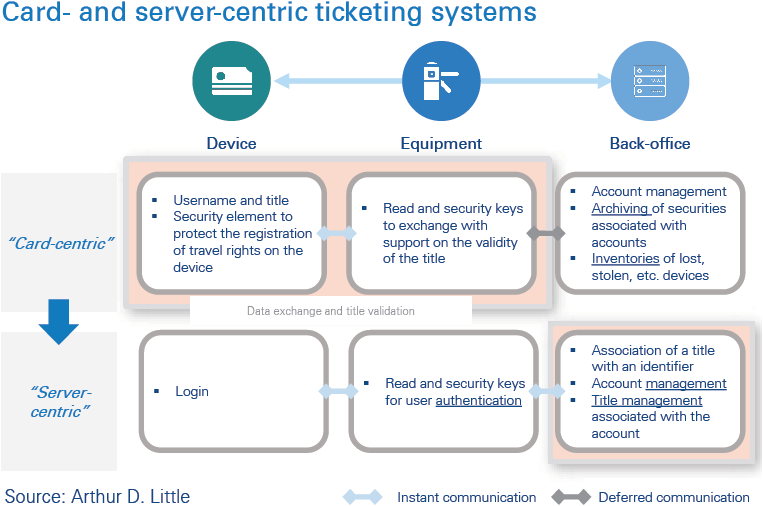 Transformative server-centric ticketing technologies have moved onto the radar of operators and transport authorities over the last 10 years. These rely on open-loop environments in which equipment reads IDs and then checks their validity with remote servers. This offers the opportunity to dematerialize the ticket more easily, as transport rights are no longer encrypted within the ticket itself, but outsourced to external servers. If this has been deployed by the transit agency, passengers can often pay and ride via contactless bank card (EMV/open payment) or smartphone (m-ticketing). As well as ease of use for consumers, server-centric solutions are flexible, support faster innovation, and lower equipment costs.

The benefits of dematerialized solutions

By removing the need to purchase, scan and retain a physical ticket, dematerializing makes the journey more seamless for the consumer, which improves the overall experience.

2 Versatility and adaptability to enable innovation

The introduction of innovative pricing schemes (such as account-based ticketing and pay-as-you-go) is fostered by ticket dematerialization. Remote, back-end platforms consolidate transactions and offer the ability to bill customers once their trips are done – for example, on a daily basis.

Server-centric ticketing can support multiple technologies for storing and validating tickets, now and in the future. Tickets can be validated through bank cards, e-wallets, smartphones, smartwatches and biometry, as long as the field equipment can read such “IDs”.

Through improved customer experience, dematerialization also offers the opportunity to widen the addressable market (mainly to include occasional travelers), as well as optimize the cost structure. This is thanks to less pressure on ticket vending machines and operations related to cash collection and ticket issuance.

To demonstrate this, Transport for London (TfL) saw the following benefits after introducing open payment in 2014

Overcoming the challenges to widespread adoption

Current penetration of dematerialized ticketing is not deep within transit systems. This is for three main reasons:

Open payment: The passenger validates a contactless bank card when beginning their journey, and again when finishing it (if required). Billing is direct from the bank/credit card account and can be on a fixed or variable/aggregated model. Operators require front-end validation equipment compatible with the Europay, Mastercard, Visa (EMV) security standard, Payment Card Industry Data Security Standard (PSI DSS)-certified equipment, contracts with acquiring banks to aggregate transactions, and contracts with payment processors.

M-ticketing: The passenger uses a mobile phone (or a wearable such as a smartwatch) as a channel to buy and validate the ticket. Multiple technologies (NFC, QR codes, SMS or animation) can be used for each transaction, as described below. The majority of m-ticketing schemes currently rely on NFC or QR codes.

1 The limitations of “traditional” infrastructure

There is high interdependency between media, systems and equipment in traditional ticketing systems. Legacy equipment in card-centric environments is not designed to incorporate technologies required to support the main dematerialization options. Adopting open payment and m-ticketing therefore requires retrofitting equipment, such as enhancing the system infrastructure to make it compliant with EMV standards. Transit agencies must conduct opportunity studies to ensure the costs of these do not exceed incremental benefits. Parallel architectures for fare calculation and account management may need to be added, which will increase integration and management costs.

The development of ticketing systems has been mainly CAPEXbased, with long periods of amortization that are disconnected from technological upgrades. The “reinvestment” required by systems enhancement may be out of investment cycles, while the introduction of m-ticketing is more suitable to OPEX-based business models.

The Massachusetts Bay Transportation Authority introduced m-ticketing through QR codes on its network of 140 commuter train stations in 2012, utilizing technology from Masabi. Passengers pay with their mobiles, with QR codes inspected on trains by control agents. In four years, penetration rose to nearly half (49 percent) of all fares, with a 40 percent drop in sales via ticket machines and a 25 percent fall in on-train cash purchases, all of which decreased costs. Revenue grew by 33 percent during the same period, which showed the increase in utilization.

The card-centric environment built its own success thanks to high levels of security and robustness, which is a must-have when dealing with millions of validations and transactions per day. Conversely, mobile technologies’ lack of track record can impede large-scale adoption, notably for subscription-based products.

Options for current and future innovation

In spite of the constraints developed above, there are still paths and technologies that could be adopted to make dematerialization possible.

There are broadly two options – building upon the core infrastructure or implementing alternative paths with parallel technology: 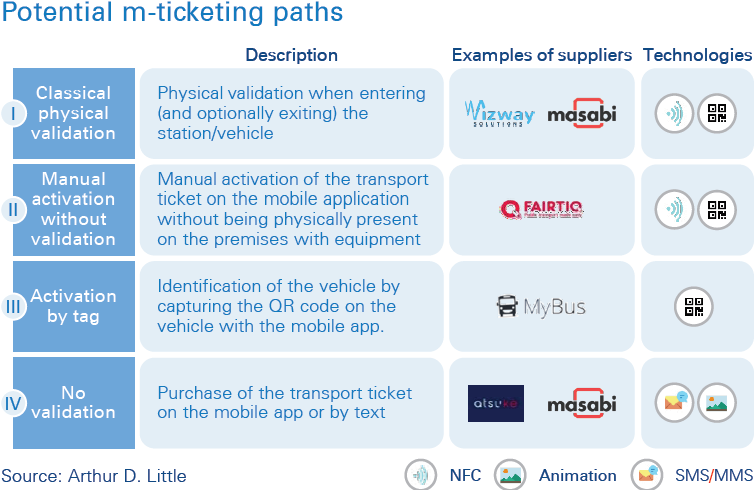 Building upon the existing infrastructure:

Introducing new dematerialized ticketing is easier within server-centric architectures because they remove the need for physical tickets or tokens. QR-code technology has gained traction over the last years thanks to its cost-competitiveness, particularly in Asia. The customer journey remains the same, with the passenger scanning the QR when passing through turnstiles, at validators on bus/tram platforms, or at entrances to transport carriages. Public transport authorities developing server-centric architectures also tend to heavily use openpayment technologies, which removes the need to buy tickets, validate the payment card, and use the digital wallet to perform transactions and as a source of billing.

In New York, the MTA will roll out the OMNY (One Metro New York) program by 2023, which aims to enable passengers to use contactless cards or smart devices to make fare payments and enter the system. Anyone who registers with the OMNY program will be given a secure and personalized dashboard, as well as access to trip history and the ability to manage payment media.

Unlocking opportunities for all stakeholders

Dematerialization of ticketing is a logical evolution within mass transit networks, as it allows the further digitalization of offerings and - along with the development of suitable data architecture - it constitutes a key requirement for the development of Mobility-as-a-Service (MaaS) with public transport as a backbone. The dematerialization of ticketing is thus critical for mobility stakeholders along the value chain to further unlock opportunities:

Mass transit operators should assess opportunities to drive superior client experience by upgrading their ticketing capabilities, and making a sound assessment of available technologies that best fit their networks.

Ticketing solution providers should seize business opportunities by broadening their product portfolio of dematerialized ticketing technologies to cover the differentiated needs of PTOs.